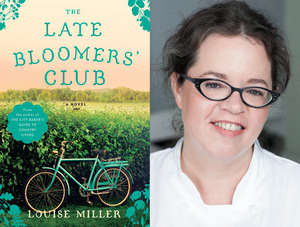 This is a ticketed event. Your $5 ticket can be used as a coupon off the price of the book. Click the link to the left to purchase tickets. Please note that you must buy your copy from Wellesley Books in order to meet Louise and have her sign your book at the event.

For this event, Louise will be in conversation with Juliette Fay, author of The Tumbling Turner Sisters.

ABOUT THE LATE BLOOMERS' CLUB
A delightful novel about two headstrong sisters, a small town’s efforts to do right by the community, and the power of a lost dog to summon true love.

Nora, the owner of the Miss Guthrie Diner, is perfectly happy serving up apple cider donuts, coffee, and eggs-any-way-you-like-em to her regulars, and she takes great pleasure in knowing exactly what’s “the usual.” But her life is soon shaken when she discovers she and her free-spirited, younger sister Kit stand to inherit the home and land of the town’s beloved cake lady, Peggy Johnson.

Kit, an aspiring—and broke—filmmaker thinks her problems are solved when she and Nora find out Peggy was in the process of selling the land to a big-box developer before her death. The people of Guthrie are divided—some want the opportunities the development will bring, while others are staunchly against any change—and they aren’t afraid to leave their opinions with their tips.

Time is running out, and the sisters need to make a decision soon. But Nora isn’t quite ready to let go of the land, complete with a charming farmhouse, an ancient apple orchard and the clues to a secret life that no one knew Peggy had. Troubled by the conflicting needs of the town, and confused by her growing feelings towards Elliot, the big-box developer’s rep, Nora throws herself into solving the one problem that everyone in town can agree on—finding Peggy’s missing dog, Freckles.

When a disaster strikes the diner, the community of Guthrie bands together to help her, and Nora discovers that doing the right thing doesn’t always mean giving up your dreams.

ABOUT THE AUTHOR
Louise Miller is a writer and pastry chef living in Boston, MA. Her debut novel, THE CITY BAKER’S GUIDE TO COUNTRY LIVING was selected as an Indie Next pick by the American Booksellers Association, a Library Reads pick by Librarians across the U.S., and was shortlisted by the America Library Association’s Reading List Council for best women’s fiction in 2017. Her 2nd novel, THE LATE BLOOMERS’ CLUB, will be published in July 2018. In addition to baking and writing, Louise is an art school dropout, an amateur flower gardener, an old-time banjo player, an obsessive moviegoer, and a champion of old dogs

ABOUT THE MODERATOR
Juliette’s latest novel, The Tumbling Turner Sisters, was published by Simon & Schuster on June 14, 2016. Costco had chosen it as the Pennie’s Book Club Pick for January 2017. Her first published novel, Shelter Me, was designated as one of the ten best works of fiction in 2009 by the Massachusetts Center for the Book, an affiliate of the Library of Congress. It was also named to the Indie Next List of the American Booksellers Association, was chosen as one of six novels for Target’s 2009 Bookmarked Club, and was a Good Housekeeping featured Book Pick. Her second novel, Deep Down True, was short-listed for the Women’s Fiction Award of the American Library Association. The Shortest Way Home, her third novel, was chosen as one of Library Journal‘s Top 5 Best Books of 2012: Women’s Fiction.