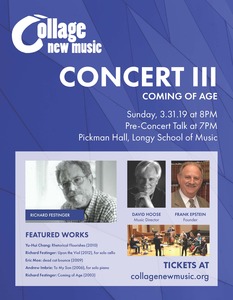 Another milestone—the 70th birthday of Richard Festinger, whose vibrant music we have had the excellent fortune of getting to hear over the past few seasons. Richard’s spirited creations grow out his years as jazz pianist and guitarist that intersected with composition studies with Andrew Imbrie. Three works, two by Festinger and one by his teacher, make a powerful core to this final program of CNM’s season. These works are embraced by equally energetic and engaging music: Eric Moe's irrepressibly whacky dead cat bounce and Yu-Hui Chang's Rhetorical Flourishes, on texts of Neil Shepherd. To the Chang and the Festinger Coming of Age, soprano Tony Arnold lends her astonishing gifts.

Richard Festinger: Upon the Viol (2012), for solo cello