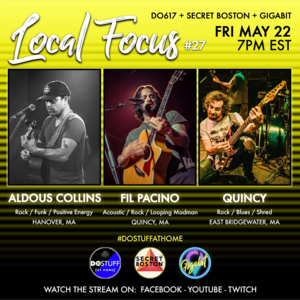 Local Focus is where the best artists in Boston and beyond perform from their home - to yours. Stay In, Stay Safe and Stay Tuned!

As part of #DoStuffAtHome and in Partnership with Do617 and Secret Boston we've teamed up for this week's streaming party!

7:00pm- Aldous Collins of the Aldous Collins Band
One of the busiest and most popular musical acts on the South Shore is the funk band led by singer Aldous Collins, and they’ve gone beyond the local club scene to play festivals all around the region, and sold out shows at the premier Boston clubs.

With the band sidelined by the quarantine, Collins decided to use his musical gift in another way, which is how The Spiritual Gangster Tour was conceived. Earlier this week, Collins played his 13th virtual concert on the tour, which had earned over $17,500 for various charities in the region, most of them quarantine-related.

Tune in on Do617, Secret Boston, or Gigabit 's Facebook

or these platforms below