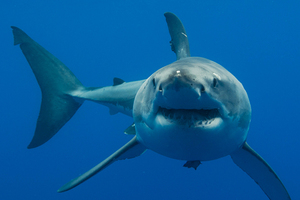 Gregory Skomal, Program Manager and Senior Scientist, Massachusetts Division of Marine Fisheries
The Cape Cod white shark population has increased in recent years in response to the dramatic increase in the seal population. Shark sightings—some close to popular swimming and surfing beaches—are becoming more frequent and negative interactions between sharks and humans have become a real concern. Gregory Skomal has studied and tracked white sharks in the Atlantic for more than 30 years. In this lecture, he will examine the behavior, ecology, natural history, and population dynamics of this species, and how scientific research can help sharks and humans coexist in the Cape Cod waters.

Gregory Skomal is an accomplished marine biologist, underwater explorer, photographer, and author. He has been a fisheries scientist with the Massachusetts Division of Marine Fisheries since 1987 and currently heads the Massachusetts Shark Research Program. He is also adjunct faculty at the University of Massachusetts School for Marine Science and Technology and an adjunct scientist at the Woods Hole Oceanographic Institution. He holds a M.A. from the University of Rhode Island and a Ph.D. from Boston University. For more than 30 years, Greg has been actively involved in studying the life history, ecology, and physiology of sharks. He has written dozens of scientific research papers and has appeared in a number of film and television documentaries, including programs for National Geographic, the Discovery Channel, BBC, and other television networks.