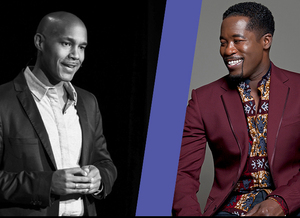 Join us for our next live Town Hall as Executive Director David C. Howse welcomes KOA (the artist formerly known as Daniel Beaty), whose plays ArtsEmerson has presented more than any other living playwright: Emergency (in 2013), Breath and Imagination (in 2015), and Mr. Joy (first at the Paramount Center in 2015, and on tour throughout Boston neighborhoods every Spring since 2017). In 2014, ArtsEmerson and KOA came together to launch I Dream: Boston, a three-year, multifaceted civic engagement program and artist-in-residency which worked to empower individuals and communities to rewrite the story of race and class inequality in America. We'll catch up with KOA, and hear about what he's writing now: the final play in the trilogy that began with Emergency and continued with Mr. Joy. You'll see video excerpts from those first two plays as a gateway into a creative conversation that is sure to be thought-provoking, poignant and inspirational.

This Town Hall will be recorded and shared on our YouTube channel at a later date. We encourage you to keep your cameras on, but if you do not wish to be recorded, you may turn your camera off. We also ask that participants remain muted until called upon to unmute. If you have a question, please use the Zoom chat to be added to the queue.