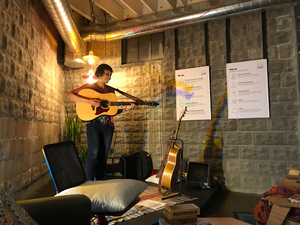 We are excited to be hosting a variety of different artists from the Greater Boston region at our HQ in Somerville. At the event you will find an array of genres including, acoustic, RnB, Funk, Alternative, Pop, and traditional North African sounds.

Funds from ticket sales will go directly to musicians and support the non-profit CultureHouse. We are an urban design nonprofit that transforms vacant storefronts into vibrant arts and culture spaces. This event will be taking place at our HQ that hosts our fabrication shop, office space, and urban design test kitchen.

More information about fundraising ticket cost: We suggest a donation amount of around $15.00, but all donations are welcomed :)

Listed below is the Live Music event line up…

Performance 1: GH Luke
GH Luke is a Massachusetts artist from Marshfield. Starting in 2016, his music is a fusion of hip-hop, RnB, Funk & Alternative.

Performance 2: Senseless Optimism (Brittany Tsewole)
Senseless Optimism’s (SO) style is along the lines of refreshingly optimistic. Dreamy bedroom pop with a taste of jazz. SO followed in the footsteps of her influences: Fela Kuti, Nirvana, and Black Sabbath, creating a persona called Senseless Optimism. She’s been steadily releasing songs since summer 2020.

Performance 3: SAM DIMITRIUS & Kait Meskell
SAM DIMITRIUS is 21years old. He would call himself a singer-songwriter/indie folk artist. He loves music that takes you places in your life or places you haven’t been yet. He's been writing songs for a few years now and has an EP coming out in August! Find him on Spotify!

Kait Meskell is a 23 year old singer songwriter from New Hampshire. She started writing music a few years ago and loves the way music allows her to express what’s on her mind. She makes all kinds of music but today she will be playing some of her acoustic sets. Check out more on Spotify and Apple Music!

Performance 4: Numidians
Numidians is a North African band presenting the indigenous Amazigh groups known as the Berbers. The band mixes the traditional and the modern to present an original style of music, portrayed in their Amazigh tunes and inspired by the landscapes and rich culture of their mountainous villages.