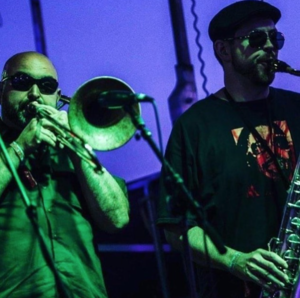 We're excited to welcome back Brian Thomas & Jared Sims to The Beehive stage this Saturday!

Brian Thomas is a Boston-based trombonist/composer/educator who began playing trombone since the age of 10 in his hometown of Rochester, NY. In addition to being one of the most sought after freelance trombonists in the region, Thomas leads his own jazz quartet, big band, and funk power house Akashic Record, each of which feature his original compositions.

Jared Sims is a musician and recording artist specializing in saxophone, woodwinds, jazz, funk and beyond. He has played music on four continents and performs regularly under his own name and with several other groups. Jared has more than thirty different albums crossing several genres and his studio work has been featured American and Japanese television as well as several video games. He performs regularly in Pittsburgh, New York City, Boston, Southeast Asia and beyond. He is currently the Director of Jazz at West Virginia University.