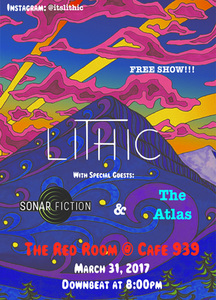 Lithic:
Over the course of the last year Lithic has been on the forefront of Boston's local rock scene. Lithic's swift ascension was made possible by their multi-faceted sound (mixing influences of Psychedelia, Grunge, funk, etc.) and a diverse audience base. The group comprises of four students of the Berklee College of Music; Juan Peña, Jack Dinger, Marvin Buessau, and Stone Panunzio. Set staples such as "I Don't Know" and "Fill the void" have found a home on the desktops of numerous Berklee students in today's underground scene. Lithic's recent feature in Miami Art Magazine "Kram" has also opened up the doors to new artistic opportunities.
Facebook: https://www.facebook.com/lithicmania/

Sonar Fiction:
Sonar Fiction is a Boston-based band, formed by 4 friends with musical influences such as: Rock, Indie, Electronic, Funk, Psychedelic, and touches of our Latin-American heritage. With the collaboration of a group of people who support our project, we’ve been able to create a family inn search of a unique and sincere artistic sound.
Facebook: https://www.facebook.com/SonarFiction/
Youtube: https://www.youtube.com/channel/UCmWFgq6FAUco5xOBQf5J4sA

The Atlas:
The Discotheque is a hard rock duo from Kansas City. Incorporating music from the 70’s as well as modern rock, their sound is centered on heavy riffs and massive drums delivering a swampy, southern slap in the face. Currently, the two are working on their debut EP, to be released sometime this summer and look forward to bigger and better things to come.