Lisa Bello — Concerts in the Courtyard 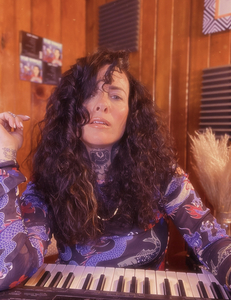 Join the Boston Public Library for a rhythm and blues (R&B) performance by Lisa Bello as part of our Concerts in the Courtyard Series, which is sponsored by Bank of America.

Please note that due to tomorrow's tropical storm warning, this concert will be moved indoors and will be live-stream only. Tune in at noon here: https://youtu.be/SrbDiAjjLgQ.

Lisa Bello is an award-winning R&B singer-songwriter who infuses her performances with the soul, swagger, and depth of feeling that make up the roots of this East Coast-bred artist's singular style.

Most comfortable on stage, Bello's latest self-titled album was written and produced in quarantine during the dark days of 2020's global pandemic and uprising for racial justice. It features collaborations with Grammy-winning and Grammy-nominated producers, as well as her 7-year-old son Cassius (who appears on both of her studio albums and also serves as her publisher). A prolific performer, Lisa toured globally for her first EP, Tommy Boy, and is preparing to release a new EP in the spring as well as a tour for the Lisa Bello album.