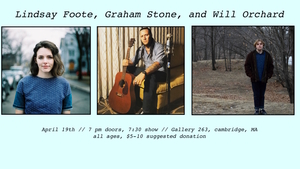 Local songwriters Lindsay Foote and Will Orchard are joined by Graham Stone from Virginia for an evening of stripped-down songs at Gallery 263 in Cambridge.

Lindsay Foote: lindsayfoote.com/music
Lindsay Foote writes honest, soul-bearing music coupled with a voice that will melt even the hardest heart. Inspired by the alternative folk music scene, Lindsay has been writing songs for as long as she can remember. Originally from Winchester, Massachusetts, she currently splits her time between Toronto and Boston. She has already released two EPs and a full album, and is currently working on a fourth release with the support of grants from the Ontario Arts Council and Factor Canada.

Going Gone has already garnered attention on the Folk circuit. “Silence” was featured on CBC Metro Morning, CBC Big City Small World, and CJRU Double Booked. RAW RAMP Magazine calls these songs “the most celestial & moving folk songs you can imagine” and For the Rabbits calls it “the sound of an artist expanding their musical horizons and fulfilling a very rich promise.”

Lindsay was a finalist in both the Songwriter Serenade Competition in Austin and the Canadian Songwriting Competition. Since the release of Going Gone, she has completed several tours throughout Texas, the East Coast, Ontario, and the Canadian Maritimes. She has performed at the Tay Creek Folk Festival and Campfire Festival (2017 and 2018), and looks forward to performing at Dripping Springs Songwriters Festival in October 2019.

Will Orchard, a native of Rhode Island, began quietly releasing music in 2015 under the name LittleBoyBigHeadOnBike. Through a cathartic and carefree process, he steadily churned out hundreds of home recorded songs compiled into literally one-hundred releases on bandcamp, often drawing from whimsy and childlike tales in his lyricism. During this time, he began to take his songs around the US in a do-it-yourself fashion, gradually accumulating a small, passionate following. With releases like God Damn Wonderland and Big Blue Butterflies he delivered colorful, unpredictable collages, complimented by the hundreds of homespun arrangements decorating his constant output of songs. He is currently on the verge of releasing his transformative first record under the name Will Orchard, to be expected in early 2020.

Graham Stone Music is the solo project of Graham McCune Stoll, a songwriter and musician currently residing in Richmond, VA.