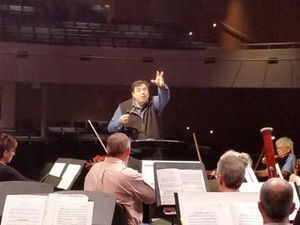 On Sunday January 8 at 3:00 PM, the Lincoln-Sudbury Civic Orchestra (LSCO) opens is 44th season with its winter concert at Lincoln-Sudbury Regional High School. The program is the first of two full concerts this season.

Benjamin Vickers, in his second full season as conductor, leads the orchestra in the program which features well-known and loved Billy The Kid Ballet Suite by Aaron Copland, and the great masterwork Mother Goose Suite by Frenchman Maurice Ravel.

American icon Aaron Copland composed the ballet Billy The Kid in 1938 on a commission for the Ballet Caravan, whose choreographer Eugene Loring was only 27 when he designed the dances for the company. Along with Rodeo and Appalachian Spring, the ballet is among America’s most often performed ballets. It was unusual in its incorporation of cowboy songs and American folk songs. Less about the famous criminal himself, whose real name was Henry McCarty, the ballet depicts the American west in the mid-19th century, with some perspective on the role he played in it. The orchestral suite itself omits some of the well-known tunes, but stands alone as a representation of the Copland’s magnificent work.

Mother Goose Suite of the Frenchman Maurice Ravel exists in several versions, having been originally scored for piano four-hands for the very young children of close friends. The “Five Little Pieces”, as Ravel described them are Its movements are “Pavane for a Sleeping Beauty”, “Little Tom Thumb”, “Little Ugly Girl, Empress of the Pagodas”, “Beauty and the Beast”, and “The Fairy Garden”. It was re-scored for solo piano by a contemporary of Ravel’s, and he scored it for orchestra himself; the form which is most often heard in concert.

“LSCO continues to make great music and has been a consistent musical force in Lincoln and Sudbury since 1973. This program shows we are tackling more difficult music each season; we are so pleased with the results, and we know audiences will love this delightful concert”, says conductor Vickers.

Opening the program is the Overture to The Impresario by Wolfgang Amadeus Mozart. The orchestra will also play the Toccata in the style of Frescobaldi, by the great Spanish cellist and composer Gaspar Cassado.

Admission is a suggested donation of $10. Lincoln-Sudbury Regional High School is located at 390 Lincoln Rd in Sudbury.

The LSCO Spring Concert is scheduled for Sunday June 11 at 3:00 PM.

A native of Albuquerque, New Mexico, Benjamin Vickers first explored his musical gifts on the cello. This led him to pursue a B.M. at the University of New Mexico, and an M.M. at Arizona State, where he excelled in cello performance. Ben went on to earn another M.M. plus Doctor of Musical Arts (DMA) in conducting at the University of Michigan. He first break as a conductor came at the Conductors Retreat at Medomak in Washington, ME, as assistant to Kenneth Kiesler, where Ben trained young conductors. He served as cellist of the El Paso (TX) Symphony Orchestra, while conducting the El Paso Symphony Youth Orchestras. He has conducted throughout the US, including performances in Carnegie Hall, at Disney World, and with well-known performers such as Tim Janis, James Galway, Jane Seymour, Kate Winslet, and Sarah MacLachlan. Ben also serves as music director of the Narragansett Bay Symphony Community Orchestra in Providence, assistant conductor of the Boston Landmarks Orchestra, and associate conductor of the Portsmouth Symphony Orchestra (Portsmouth, NH).

LSCO is a volunteer community orchestra comprising high school students and adult community members who share a love for preparing and performing substantial orchestral repertoire. The members have classical music training at the intermediate to advanced level and rehearse weekly Tuesday evenings at LSRHS. Although the scores studied and performed are the original professional scores (not arrangements for school ensembles), professional performing experience is not a requirement for membership. Members are not required to reside in Lincoln or Sudbury; the orchestra welcomes musicians regardless of town of residence.