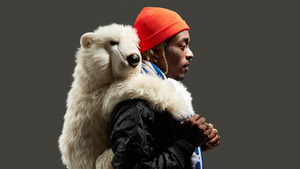 Hip-hop could certainly use a real bona fide rockstar. That’s where Lil Uzi Vert comes in. The Philadelphia rapper flaunts a vision and fashion sense just as loud as his “futuristic trap” sound and dynamic voice. He doesn’t simply stand out in a crowd; he draws everyone right to him.

“I try to create a world,” the 20-year-old declares. “It’s rap, but I get a lot of influence from rock music. When you see me or hear me, I want the experience to be dark and crazy with a lot of moshing.”

Growing up in the city Schoolly D, The Roots, Meek Mill, and Rocky Balboa call home, Lil Uzi Vert first picked up a microphone in high school. He spent countless hours honing his craft, making sporadic trips to New York City in order to record through his friend William Aston’s studio connection. Along the way, he carved out a distinct style that reflects his love for Wiz Khalifa as much as it does his passion for Marilyn Manson.
“I take influences from everything and put them into what I do,” he says. “It’s a really delicate balance, and it’s something I’m proud of. You can wear skinny jeans and still be hard.”

In 2015, he began to set the internet on fire. There was his explosive appearance on Carnage’s single “WDYW” alongside A$AP Ferg and Rich The Kid and later his turn on “Big Racks” for Young Thug’s Slime Season 2. All in which lead to the ultimate feature on the RIAA certified platinum hit “Bad & Boujee” with Migos. In addition, he spent the summer with DJ Drama, priming the crowd for Wiz Khalifa and Fall Out Boy on their “Boys of Zummer” Tour & is currently on the road with The Weeknd for the European leg of his Starboy Tour. However, everything set the stage for his mixtape, Luv Is Rage. With support from The Fader, Noisey, XXL, Vibe, HotNewHipHop, and more, Lil Uzi Vert naturally took the spotlight when it dropped. Now, Uzi has teased some new records on SoundCloud furthering fans anticipation for the follow up, "Luv is Rage 2."

“Luv Is Rage is just the beginning,” he declares. “It’s the first statement.”

“You might think it’s safe in your hood, but it’s not,” Lil Uzi Vert warns. “It’s crazy. You can’t be comfortable in the streets, so I’m letting everybody know, ‘Stay with your money. Stay on your grind. Take care of yourself.’”

On “Queso,” he joins forces with Wiz Khalifa for a bombastic and bright banger, while he and Young Thug deliver a moving tribute to A$AP Yams on the ethereal “Yamborghini Dream,” produced by Tm88.

“Yams was the first person I met from A$AP,” he admits. “He reached out to me, and we talked a lot for a whole year. I never met him in person though, but he meant a lot to me and Thug. That’s why we needed to shout him out.”

Now, signed to Generation Now – founded by DJ Drama, Don Cannon and Leighton Morrison, alongside Atlantic Records, Lil Uzi Vert is quickly setting the bar for anyone in his tracks. Having earned an RIAA certified gold single with “Money Longer” & an RIAA certified platinum single with “You Was Right,” being dubbed the most listened to artist of 2016 on Soundcloud, & covering the Sex Issue of The Fader he stands poised to ignite hip-hop with his own fire.

“I take modern rap and put more musical influence to it under the trap,” he leaves off. “I want to show people the future and what’s possible with the sound. This is who I am. This is my world.”