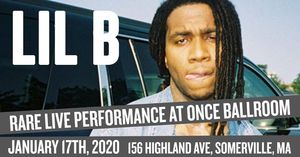 Equally inspired by Prince and 2Pac, Lil B (Brandon McCartney) is an eccentric, ambitious rapper who utilized social media to its fullest and became an Internet age celebrity, cultivating a fiercely loyal following and inspiring a generation of rappers and hipsters without ever signing to a major label. Lil B is known for his optimistic outlook, which he refers to as his "Based" philosophy, and preaches positivity and tolerance through his music. He also uses the term "Based" to signify his brand of freestyle rapping, and while much of his vast body of work sounds off-the-cuff, his more considered efforts take on serious subjects, particularly related to society and the age of information. While the majority of his output is overwhelmingly positive and encouraging, his dark side has emerged through releases like Thugged Out Pissed Off, as well as his occasional feuds with fellow rappers or basketball players. He has branched far outside the realm of hip-hop with the release of spoken word and new age material, and has dabbled with indie rock, claiming an affinity for the genre. Likewise, he has become a favorite of indie rock and experimental music types, and has received much coverage from Pitchfork and The Wire.

In 2015, Lil B and Chance the Rapper released the collaborative mixtape Free Based Freestyles. However, following the late-December release of Thugged Out Pissed Off, Lil B was unusually quiet, releasing no new material in 2016, other than appearing on Clams Casino's major-label debut, 32 Levels, and guesting on E-40's The D-Boy Diary: Book 2. He re-emerged in August of 2017 with his long-promised Black Ken mixtape, which was entirely self-produced and only featured one guest appearance (by iLoveMakonnen). ~ David Jeffries & Paul Simpson, Rovi