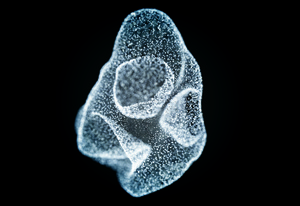 From the creator of the “I-Tunes of Smells” comes the Atom Screen, a revolutionary invention with the potential to transform the world of digital display screens and the way people absorb images and information. David Edwards’ latest invention will be unveiled this week as part of an exhibition 'Life in Picoseconds' at Le Laboratoire Cambridge.

The Atom Screen is the first of its kind impressionist screen. Impressionist screen technology presents images with dynamic texture in a similar fashion to the way impressionist painters pushed representation beyond the realism of the photograph. The Atom Screen brings to the world of fashion, culture and media a secondary texturing that can evoke emotion, heighten viewer interest and retention, while simultaneously reducing viewer fatigue.

Today’s $29 billion global commercial display market has made the digital screen ubiquitous. Innovations in screen technology have focused on one thing: higher resolution. So accustomed are we to these high-res screens that we now see every image clearly. And every image looks alike. The Atom Screen breaks that mold.

The radically new Atom Screen display is the result of a partnership between a team of Harvard University researchers led by Edwards, Paris-based design team Millimetre and entrepreneur Mouli Ramani. The exhibit opens to the public Friday, March 3rd and runs through Saturday, June 10th.