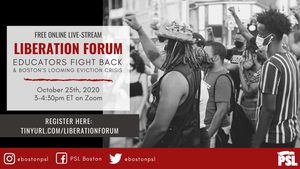 **This event will be live-streamed on the PSL Boston Facebook page. Register here to join the zoom and breakout groups after the presentation: tinyurl.com/liberationforum*******

The economic fallout from the COVID-19 pandemic has worsened the conditions of tens of millions of working class families all over the country. Across the US, nearly 220,000 people have died from the virus, and more than 8.1 million cases have been reported, according to Johns Hopkins University. The death toll in Massachusetts is over 9,500, according to the state’s Department of Public Health. In Massachusetts the unemployment rate is one of the worst in the country sitting at 9.6 percent.

As a part of the mad dash to reopen schools putting capitalists interests above the working class, mayor Walsh and superintendent Brenda Cassellius violated a Memorandum of Agreement (MOA) with the Boston Teachers Union (BTU) which set a 4% citywide positivity test rate as the precondition to closing all schools. The positive test rates in neighborhoods where the majority of BPS children lived are rising, approaching double digits in communities like Chelsea, Dorchester, and Roxbury. On October 6th, the citywide infection rate exceeded the threshold of 4%, but Mayor Walsh and superintendent Cassellius announced that although the planned rollout of hybrid learning to non “high in-person priority” (or H.I.P.P) K-3 students would be paused, schools would remain open for many students. Join the PSL for a socialist analysis on the crisis around reopening of Boston Public Schools and discussion on how we can fight back for the common good.

On October 17, Governor Baker allowed the state's eviction moratorium to expire. as the winter approaches in Massachusetts, the overcrowded homeless shelters in Boston anticipate a flood of newcomers. The Housing Court anticipates that 20,000 eviction cases will be filed immediately, but the actual number of households at risk will be much higher in subsequent months. Join the PSL for a discussion on the looming eviction crisis and what we can do to stop it.

This event will be live-streamed on the Boston PSL FB page.