Lespecial with Eliot Lipp (late set), Cycles and The Flat 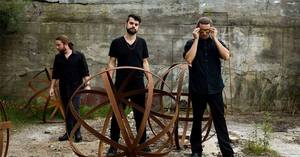 lespecial carves their own path in contemporary rock music with the release of their second album, cheen, on October 31, 2017. Pole vaulting over traditional genres, cheen is a snapshot of a band finding a remarkable creative stride, fearless in their pursuit of a synthesis of the diverse musical idioms that have inspired them as listeners and artists.

These three childhood friends from Connecticut—now based in Boston and New York—play off of a lifetime of shared experience in their writing and performance. In a power trio, it's essential that each of the players can utterly captivate you at any given time. Each individual has a lot of weight to carry and is only as strong as the weakest link. In the studio, as on stage, it seems at first blush that Jon Grusauskas—delivering lyrics that call for your attention and seamlessly moving from guitar to keys to samples—is handling the entire upper end of the spectrum… until you consider how broad the melodic embrace of rhythmatist Rory Dolan and low end wizard Luke Bemand. Injecting splashes of color and wicked chops into their heavy groove foundations or driving assaults, this dynamic battery simultaneously eases and propels lespecial through the fractious changes of cheen’s mood and tempo.

In a traditional sense, cheen is a risky album: it asks the listener to suspend a categorical approach and dig into their own eclectic unconsciousness, to adapt a phrase, and appreciate the flow of the record from start to finish, as it moves guided by an unseen plan. If there is an underlying thematic structure, it is one that is anchored—musically and lyrically—by horror flicks, 1980s video games and lespecial’s indictment of the current cultural state of affairs. Not overtly political, angry or morose, by any means, cheen seems to observe the zeitgeist and respond to it in songs like “Stolen Land”, “American Apocalypse” and “Sound That We Do”, the last of which features the celebrated Bay Area hip hop wordsmith Zion I. Meanwhile, the band winks at Mario Brothers in the J Dilla inspired “Donut Ghost House” tracks that bookend the album. In between can be heard pensive indie rock that evokes Flaming Lips and Radiohead, down-tempo apocalyptic dub trances tinged with hints of Tool, polyrhythmic technicality a la Belew-era King Crimson and a penchant for all things Nine Inch Nails. This from a band that released an exclusive single through The Untz—one of the premier outlets for “EDM” producers—a month before announcing cheen, then did an interview with a metal mag a week later, and that can get weirdly funky with a nod to Primus. To further underscore the broad net they cast, lespecial is rounding out 2017 with a Halloween weekend opener for Disco Biscuits and December dates with Dopapod.

lespecial’s willingness to take this risk of presenting an album full of flavors and feels is a reflection of the respect they have for their fans, present and future: they simply don't underestimate the listener, and that itself is refreshing, bringing about comparisons to The Clash, who destroyed every boundary they came across, working reggae, dub, funk and folk ballads into the socially and politically relevant punk rock they had come to personify. Here at another turning point in music and culture, lespecial has taken a huge step towards that goal of synthesizing their own varied and divergent influences, regardless of the seeming incongruity of the elements, and captured a snapshot of their generation, their cultural climate, and what that all sounds like...