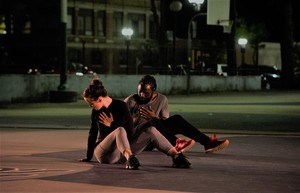 Join WBUR and beheard.world for an exclusive screening of “Lenox Street: The Film,” followed by a moderated conversation with the director Jay Paris, and Anna Myer, co-founder of beheard.world, as well as participants in the Lenox Street performing arts workshop featured in the film.

"Lenox Street" follows the lives of 19 teenagers from one of Boston’s most violent neighborhoods with 39 major school infractions as they enter a three-month performing arts workshop and then go on stage around the city. The film looks at the power of the expressive arts to transform teenagers, particularly teens who are struggling with their identities and place in the world. "Lenox Street" premiered at the 2017 GlobeDocs Film Festival and continues to gain strong critical review. beheard.world is currently negotiating with distributors for broader release