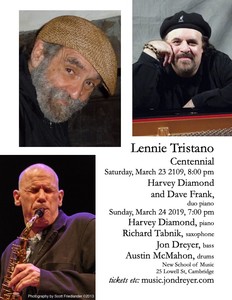 At the New School of Music, 25 Lowell St, Cambridge MA. Walk from Harvard Square, take the #71 or #73 bus, or park free in the lot behind the school.

Dave Frank is one of the busiest solo jazz pianists and music educators on the scene today. He is the author of the best-selling Hal Leonard book and video series, Joy of Improv and Breakthrough to Improv, was an Associate Professor of piano at Berklee College of Music in Boston from 1987-2004, and was a co-founder of the New York School of Jazz (1983-86). Since 1994, Dave has been traveling worldwide, and to date has presented solo concerts and master classes in Spain, England, Holland, Belgium, Brazil, South Africa, Switzerland, Argentina, Nicaragua, Peru, Costa Rica, France, and throughout the US and Canada. He has been a featured performer and clinician at major jazz festivals worldwide including the 2012 Jazzheads Jazz Festival, the 2010 Jazz Alive Festival, the 2002 North Sea Jazz Festival, the 2001 and 2003 Montreux Jazz Festivals, and the 1999 Winnipeg Jazz Festival. Dave Frank has been the subject of feature articles in the Boston Globe, Keyboard Magazine, and The Chronicle of Higher Learning. He can be regularly seen on the BET Jazz Network and was recently the featured guest on the NPR radio show Jazz Inspired with Judy Carmichael. To listen to the interview on the Jazz Inspired website click here (mirror). Dave has four critically acclaimed solo piano CD’s released on the Jazzheads label: Portrait of New York, Turning it Loose!, Ballads and Burners, and Power of the Piano. All are available for purchase or download at www.jazzheads.com. Dave’s teachers include the legendary Lennie Tristano, Charlie Banacos and John Larosa.

Saxophonist Richard Tabnik studied with the jazz alto saxophonist Lee Konitz from 1970 to 1972. During the years from 1975 through 1979, he lived in Buffalo, N.Y. and played lead alto sax in Frank Foster's Big Band at University at Buffalo, The State University of New York. He has written for and performed in many capacities in Houston, Texas, Atlanta, Georgia, and Providence, Rhode Island. He studied and performed with Connie Crothers from 1980 until her death in 2016, including her quartet CCQt, featuring Connie Crothers on piano, Roger Mancuso on drums, and Sean Smith on bass. His recordings include Duo Dimension with Connie Crothers, Solo Journey, In the Moment with Carol Tristano and Cameron Brown, and Life at the Core with Andy Fite, Calvin Hill, and Roger Mancuso.