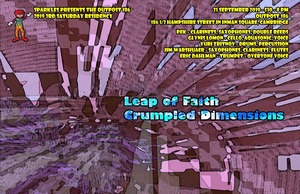 Notes by PEK
Leap of Faith is the core trio of the Leap of Faith Orchestra (LOFO) comprised of PEK on clarinets, saxophones, double reeds & flutes, Glynis Lomon on cello, aquasonic & voice, and Yuri Zbitnov on drums & percussion. The ensemble is based in Boston and dates back to the early 90s. We utilize a huge arsenal of additional Evil Clown instruments to improvise long works featuring transformations across highly varied sonorities. The ensemble has always been highly modular and our many recordings feature the core trio in dozens of configurations with a huge list of guests.

For this performance the core trio is joined by Jim Warshauer (reeds) and Eric Dahlman (trumpet, overtone voice). Eric and Jim have a long history together and joined the Evil Clown Roster towards the beginning of 2018 as I was raising the ensemble for Leap of Faith Orchestra performs Cosmological Horizons by PEK (which was performed in July).

I love it when great players come to Evil Clown in groups with long prior histories. Their common experience enhances the deep roots of many of our various ensemble permutations. Eric and Jim fit in right away and have each performed on over half a dozen sets with Leap of Faith, Leap of Faith Orchestra and Turbulence in the last year!

As the Leap of Faith story unfolds, we have some ensemble variations which gel deeply and bear repeating. This will be the third performance by this particular quintet version of Leap of Faith. See below for links to audio and video of the first two: Proof Theory, and Potential and Actual Infinities. There are also other performances in larger units (including the scored performances of Cosmological Horizons and The Photon Epoch) which feature Eric and Jim.