Lea DeLaria from 'Orange is the New Black' 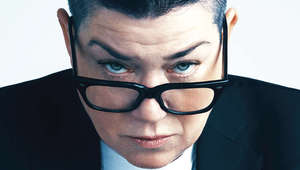 Get discounted $20 tickets with this link:

She's worn the orange, gone behind bars and won a SAG Award but did you know that actress Lea DeLaria is also a headlining stand-up comic with a mean set of jazz pipes? After starring as the hard-edged yet lovable inmate Carrie "Big Boo" Black in the hit Netflix series Orange Is the New Black, DeLaria swept into the hearts of audiences and became a not-exactly-overnight sensation. Before showing off her impressive acting chops in OITNB, DeLaria spent a couple decades as a groundbreaking comedian and a Broadway star (On the Town, The Rocky Horror Show). To top it all off, she's a widely-acclaimed jazz vocalist, who's released five solo discs, including 2015's House of David, which gives a swinging vibe to the catalog of David Bowie. Catch her when she delights audiences with her stunning vocals and hilarious commentary at the The Wilbur Theatre in Boston.