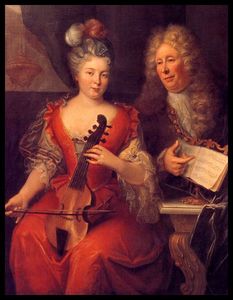 The new season of Early Music Afternoons begins on Sunday, October 8, 2017, with a concert of music from 18th-century France performed by Duo Maresienne (Carol Lewis, pardessus and basse de viole; Olav Chris Henriksen, theorbo and baroque guitar). The duo will play a variety of chamber works unique to this elegant age in French music, including pieces by Marin Marais, Louis de Caix d’Hervelois, Robert de Visée, among others. The concert will take place at 3:00 pm at the Somerville Museum, One Westwood Road (at Central St.), Somerville, MA. Admission is $20 general admission, $15 students, seniors and low income. Ample street parking is available. An informal reception at the Museum will follow the concert. For further information and reservations, call (617) 666-9810 or go to www.somervillemuseum.org.
18th-century France was a musical age of style and sophistication. Musicians at the courts of Louis XIV, XV and XVI composed dances, theatrical music, and pieces in many different characters for bass viola da gamba and theorbo as well as for the tiny pardessus de viole and the baroque guitar. Duo Maresienne will perform a chaconne, a tombeau, dances and character pieces by Marais, Hugard, Dollé, Caix d’Hervelois, de Visée and Campion. The music will range from “Les Oiseaux” (the birds) to a “Carillon” (imitation of bells) and “La Furieuse” (the furious one). To recapture the flavor of this very special music, Mr. Henriksen and Ms. Lewis will be playing instruments copied after original 18th-century instruments in the collection of the Museum of Fine Arts in Boston.
Olav Chris Henriksen and Carol Lewis, frequently heard as soloists, have also performed and recorded with many ensembles in the United States and abroad, including Boston Camerata, Ensemble Chaconne, Emmanuel Music, Capella Clausura, Capriccio Stravagante, Hespèrion and others. They specialize in a range of music for bowed and plucked instruments from the 15th to the 18th centuries, and they also enjoy performing new music: in June 2017 they were among the performers appearing with countertenor Anthony Roth Costanzo in a concert at the Isabella Stewart Gardner Museum featuring works of composer Nico Muhly.