Laura Cortese and the Dance Cards 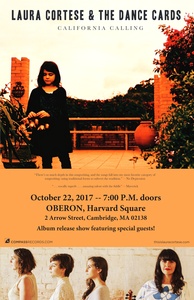 Cutting her teeth as a sideman in Boston's roots music scene, Laura Cortese forged a unique path through a pool rich in talent (due to a large population of Berklee School of Music graduates like herself) including stints as an instrumentalist with Band of Horses, Pete Seeger, Rose Cousins, Jocie Adams (of the Low Anthem), and Uncle Earl. Her Compass Records debut, CALIFORNIA CALLING, is the next step in her career as a frontwoman and bandleader - she and her Dance Cards, break new ground with a bold and elegant new album, based in the lyrical rituals of folk music but exploring new territories of rhythm and sonics. With the support of Sam Kassirer, album producer of folk-pop favorites like Lake Street Dive and Joy Kills Sorrow, they've created something that's simultaneously rowdy, delicate and cinematic. This is post-folk that seriously rocks. On their CD release tour, cellist Valerie Thompson (cello/vox), fiddler Jenna Moynihan (fiddle/vox), and Zoe Guigueno (bass/vox) pair their sophisticated string arrangements and rich vocal harmonies to band leader Laura Cortese's poignant and powerful singing.