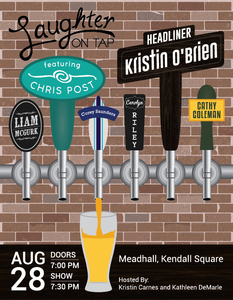 Join us for Laughter on Tap at Meadhall. With 100 craft beers on tap and at least 100 laughs you'll start your week off right! Meadhall is conveniently located in the heart of Kendall square steps from the Kendall Square T station. Doors at 7:00pm show at 7:30pm: