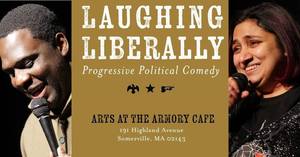 Where:
http://artsatthearmory.org/events/laughing-liberally-7/ Arts at the Armory
191 Highland Ave
Somerville, Massachusetts 02143

We’re back to bring you Laughing Liberally Boston, a political comedy show featuring some of Boston’s top liberal and progressive comedians. Doors are at 7:30 and show starts at 8pm.

In addition to some of the finest progressive comedians Boston has to offer, each Laughing Liberally Boston show will feature a special interview segment with a local political figure, journalist or activist. This month’s guests is Shari Caplan of the AIDS Action

Shari Caplan is the siren behind “Advice from a Siren,” published by Dancing Girl Press in 2016. Her poems have swum into Gulf Coast, Blue Lyra Review, Deluge, Drunk Monkeys, Non-binary Review, and elsewhere. Shari’s work has earned her a scholarship to The Home School in Hudson, a fellowship to The Vermont Studio Center, and nominations for a Rhylsing Award, a Bettering American Poetry Award, and a Pushcart Prize. A wearer of many tophats, she has produced and performed in “The Poetry Circus,” “The Fairy Tale Poetry Walking Tour,” and other cross-pollinations for the Massachusetts Poetry Festival. You may encounter Shari as “Betty BOOM, America’s Sweet-tart” giving intimate readings across the nation as part of The Poetry Society of New York’s “The Poetry Brothel.” Shari acts in local theater productions and can be seen frequently at The Footlight Club in Jamaica Plain. She works on the Development Team at AIDS Action Committee, where she puts her event planning skills and passion for connecting people towards ending the HIV/AIDS epidemic for good.

Laughing Liberally Boston takes place the second Saturday of every month, with the next show on Saturday April 13th at Cafe At the Armory, 191 Highland Ave, Somerville, MA 02143. Doors open at 7:30pm with the show starting at 8pm. Admission is $8 online and $10 at the door.