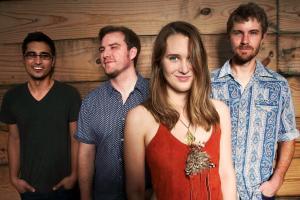 "It's not quite folk, it has hints of pop perhaps, and it rocks like no other." - No Depression
There's a sort of magic when you meet someone who’s doing what they're clearly meant to be doing. You can feel an electricity in the air—an energy that can't quite be explained—but you know it when you see it. This is undeniable when you meet Laney Jones. In a few short years, since picking up the banjo, this young songwriter and bandleader went from playing rural Florida watering holes to performing on PBS alongside Alison Krauss and licensing music for the likes of Disney Pixar.

Now for her self-titled release, out March 11th, she's matured her sound and become more akin to rock-n-roll than the roots music for which she's been primarily known. “This album has a lot to do with self discovery,” Laney confides. “The veil is down. My sonic palette has expanded, and I felt like the studio was a perfect playground for experimenting. We followed where our ears led.” The explorations were under the guidance of Grammy-nominated producer David Plakon (Wild Child, Young Rapids and Roadkill Ghost Choir). Playfully, Laney dubbed the album’s genre as “retro majestic,” a mélange of timeless tunes that harken back to 1960s and 70s singer-songwriters with innovative modern textures and grooves. At its core, Laney Jones is a folk-rock record brimming with sonic surprises like shards of filthy guitar, shimmering Fender Rhodes, hip-hop breakbeats, and even untutored clarinet playing.

The album’s bold creativity is contextualized by a well-crafted 10-song collection. “Do What You Want" opens the album with Laney’s lone tenor guitar and intimate crooning: "What's the point of living if you can’t have fun? What's the point of heaven if you don't know anyone?" The writing is the quintessence of Laney Jones. It contains a philosophical sophistication plainly written, waiting to be picked by the listener like ripe fruit on the vine.

Other standouts are the invigoratingly hooky “Allston (Dance Around),” the haunting folk of “Who Could Love,” and the album’s moony conclusion, “Endless Summer.” Born in the early hours after a dance party in Allston, MA, the lead single was co-written by guitarist and main collaborator, Matthew Tonner, as an anthem to shake away the drudgery of mundane labor. “Who Could Love” is a pivotal track for Laney that represents something of an artistic epiphany. Wrapped in cryptic imagery, the lyrics express the anguish of her personal challenge of forging an identity as an artist, and at the same time connects this to the fear of rejection that universally affects us all. The final cut, “Endless Summer,” is sardonically juxtaposed with bold flourishes of slide ukulele and longing lyrics. “People wait for life to start," Laney says. "As a kid, you eagerly await summer vacation, for school to be finally over, but then what? Can it ever be as good as you'd imagined?”
Amazingly, Laney Jones’ music career started as something of an accident. She picked up the guitar and began writing songs during college as a respite from the demanding academic curriculum working on an international business degree. Her aptitude as a singer and songwriter was instant. She soon found herself immersed in the roots scene as a rising young talent. It was all a whirlwind for Laney—uncovering her innate multi-instrumental gifts and being thrust into a distinct niche of music. Laney would unpack her creativeambitions while studying abroad in China without any instruments and far away from the hubbub. Away from everything, she realized her desire to do music and vowed to pursue it. When she came back to the states, she auditioned for Berklee College Of Music and was awarded a songwriting scholarship. Laney matriculated at the esteemed institution for a year and a half where she had the opportunity to study with singer-songwriter, record producer, and A&R executive Kara DioGuardi. Learning the craft of pop songwriting from a master enabled Laney to authentically discover and cultivate her own talents for emotionally resonant and infectiously catchy songwriting.

Laney has received accolades from No Depression and L.A. Record, as well as the legendary Alison Krauss. As an unsigned artist, she’s managed to grace the stage at New York’s Lincoln Center and DC's Kennedy Center for the Arts, feature on PBS’s Great Performances series, earn corporate sponsorships and licensing deals, and receive nationwide college radio spins for her original songs. Currently, her music is spinning in steady rotation on over 50 CMJ indie radio stations across the country, and her voice can be heard on soundtracks of films and TV from the likes of Disney and Dreamworks. Laney’s also won many prestigious songwriting and new artist competitions, most notably the prestigious John Lennon Songwriting Contest.

In 2015, Laney and her band, the Spirits, totaled over 140 performances across the USA, all the while showcasing her lively stage presence and diverse body of work. Up next, Laney Jones and the Spirits will be on the road through the summer. As one critic commented, “Laney is a firecracker on stage. This band is not to be missed!”

Reflecting back on her path, Laney says: “It’s important to follow your mind’s eye and do what feels right to you. It’s hard to shut out other people’s ideas of what you should be or what you should be doing, but you always need to do what’s right for you.”

Hayley Sabella is a singer-songwriter / local farmer / earnest truth-seeker / independent woman / dork, who originally did her thing in her hometown of Plymouth, Massachusetts and is now doing her thing in other places, too.