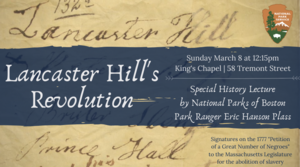 Lancaster Hill, a free black man living in colonial and revolutionary-era Boston, married Margaret, a woman enslaved by a parishioner, at King's Chapel in the 1750s. During the American Revolution, Hill joined the ranks of notable activist and abolitionist Prince Hall, and advocated for the abolition of slavery.

In 1777 Lancaster Hill signed his name to a petition with eight other men, demanding that this new independent state of Massachusetts abolish the institution of slavery once and for all. This stroke of a pen, in his own hand, was a distinct moment in this man's transformation into an American revolutionary. Over the span of some thirty years, Lancaster Hill transformed from being a man enslaved by a government, to a man who demanded recognition and accountability of government.

Join National Parks of Boston Park Ranger Eric Hanson Plass for a presentation and discussion about this revolutionary and parishioner of King's Chapel.

Eric Hanson Plass has over ten years experience as a public historian and park ranger for the National Park Service in Boston. He holds a master's degree in Public History from the University of Massachusetts Boston.