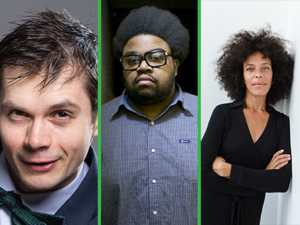 Lamont Price is one of the funniest comedians in the country and has been seen on Comedy Central, Hulu and NBC. He's performed at both the prestigious Montreal Just For Laughs and Aspen Comedy Festivals. You may have heard him on such popular podcasts as 2 Dope Queens, TV Guidance Counselor and The J Train Podcast.

He's shared the stage with some of the best comedians in the country including Hannibal Buress, Eric Andre, Tig Notaro, Phoebe Robinson, Donald Glover, Dane Cook and Dave Attell to name a few.

He co-founded the Boston Calling Music Festival comedy arena in 2016 (curating the stage as well).

Lamont was recently named "Boston's Best Comedian" by The Improper Bostonian (2017) and Boston Magazine (2018). You can currently see him as regular host of his own NBC Web Series called "Lamont's Boston" and he'll be hosting this year's Boston Calling Music Festival

Bethany Van Delft’s “hip & grounded, laid back delivery” has earned her the honor of performing at the prestigious J4L Festival in Montreal, SF Sketchfest, All Jane Festival, Boston Calling, as well as appearances on Comedy Central, and 2 Dope Queens podcast. Her monthly show, Artisanal Comedy, has been named “one of the top indie nights to check out”, and her hilariously cringeworthy live storytelling show/podcast with Nick Chambers “Starstruck: Close Encounters of the Awkward Kind” won Boston’s Best Comedy Show. Unashamedly in touch with her inner nerd, Bethany has been a panelist on “You’re The Expert” and “Literary Death Match”. She hosts MOTH mainstages around the country, MOTH storyslams & Grandslams, is thrilled to have a MOTH story re-posted by SULU! (aka George Takei) and honored to have a story included in The MOTH's 2nd book "All These Wonders".

Dan Boulger began his comedy career in late 2004 only one week into his freshman year of college. Quickly becoming a favorite in the New England area Boulger started performing nationally after winning the Boston Comedy Festival in 2006 at the age of 20. He has since received recognition from both audiences and industry alike having made multiple appearances on The Late Late Show with Craig Ferguson as well as on Comedy Central and The BBC. In 2015 Dan recorded a half hour special that received regular play on Sirius/XM and in 2016 he recorded his first full-length album titled Not Ready For This, which is available on ITunes as well as Spotify and most music streaming services.