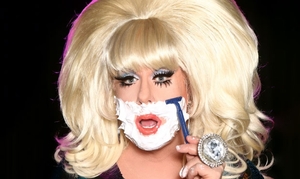 "A scream for sanity from the nastiest, most big-hearted comic performer around."
John Cameron Mitchell
Part of the 2017/18 Glowberon Season
Written by Lady Bunny and Beryl Mendelbaum

Foul-mouthed drag legend Lady Bunny usually shies away from politics – because it’s one hell of a train wreck right now. But she doesn’t shy away from gender politics. From the new pronoun we’re forced to learn every time Will Smith’s son puts on a dress, to Caitlyn Jenner reaching out to Republican presidential candidate Ted Cruz to become his ‘trans ambassador’, Bunny feels that it’s time for the gloves to come off.

Featuring new parodies of Adele, RENT, and Bruno Mars punctuated by some actually insightful social commentary (well, she thinks so anyway). Trashing the current overemphasis on political correctness, Bunny breaks down some of the latest buzzwords that we’re all supposed to remember for every occasion.

The self proclaimed ‘pig in wig’ brings her trademark huge hair to astound and offend – prepare to be challenged.


BIO
With her glitzy outfits, sky-high wigs and false eyelashes long enough to embarrass Tammy Faye Baker, multi-talented drag artist Lady Bunny would turn heads even if looking glamorous was her only talent. But “she” isn’t just another man in a dress: Bunny is a successful comedienne, DJ, actress, singer/songwriter and most famously, the emcee and creator of Wigstock, the outrageous drag festival of drag and music which electrified New Yorkers every Labor Day for over 20 years. Wigstock featured almost every queen who ever worked in NYC, but also attracted more mainstream recording acts who just wanted to join in the fun–including Dee-Lite, Debbie Harry, Boy George, RuPaul, John Cameron Mitchell as Hedwig, The B-52s’ Cindy Wilson, Crystal Waters, CeCe Peniston, Ultra Nate, Kristine W, Barbara Tucker and Vickie Sue (Turn The Beat Around) Robinson. Soon, the festival became known as a hipper version of Gay Pride Day.