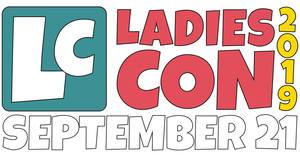 The Ladies of Comicazi, who represent an inclusive community devoted to consuming, critiquing, and creating comics and pop culture, are teaming up with their homebase, Comicazi, to bring the fourth annual LadiesCon to the Armory on September 21, 2019.

The free one-day show will present writers, artists, creators, and artisans specializing in comics, fantasy, and science fiction, with a particular emphasis on creators who are women, LGBTQ, non-binary, and people of color, as well as local artists. Attendees will have the chance to meet creators, buy books and crafts, and see panels on a variety of topics, including tabletop and RPG gaming, fandom, Magical Girls, and casual costuming (bounding).

Comic guests include: Ming Doyle - writer and artist on Constantine, and artist for The Kitchen,now a major motion picture; Tana Ford- Hugo-nominated artist on Silk, Gwenpool, and Jem & the Hologram; Mad Rupert - Artist and writer for the web comic Sakana; Agents of the Realm creator, Mildred Louis and Joe Quinones of America and Howard the Duck .

Media Guest: Gigi Edgley is an internationally renowned actress originally from Australia. Edgley has starred in countless film and television series and has an extensive history with The Jim Henson Company beginning with her popular role as Chiana on the company’s critically acclaimed sci-fi cult series Farscape, in which she starred for over five years. She hosted the reality TV series Jim Henson’s Creature Shop Challenge. Edgley is also a recording artist, creator of original comic books, director and producer.

The show will run from 11-5 on Saturday, September 21. For more information, visit www.ladiescon.com.