Kwasi Mensah Not From Around Here Take Two! 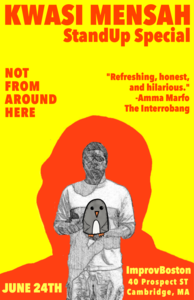 Boston standup comedian Kwasi Mensah performs an hour of standup, discussing things from race, to his first generation background, to his love of gummy bears.

Kwasi bridges the gap between insightful observations about race and still thinking he could be a Power Ranger when he was 15. He's opened for SNL's Sasheer Zamata, Aparna Nancherla, and W. Kamau Bell. He also co-produces Laughing Liberally Boston, a show that combines comedy with progressive politics. He's been featured in SF Sketchfest, the Boston Comedy Festival, The Comedy Exposition in Chicago, and was chosen to be Comic In Residence for December 2017 at The Comedy Studio.