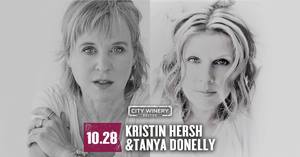 After founding her influential art-punk band Throwing Muses with her step-sister Tanya at the age of 14, Kristin Hersh has spent quality time confounding expectations and breaking rules, both hers and others.

Throwing Muses signed with the highly regarded British indie label 4AD Records in the 1980’s, the label’s first American signing, and eventually moved on to Sire/Warner Bros. After six releases the band put out their crowning achievement, Limbo, in 1996 and promptly disbanded for 7 years. In 2003, the band reformed, recorded and released the CD, Uses. Then again in 2013, Throwing Muses returned again with their first studio album in 10 years – Purgatory/Paradise.

Kristin’s solo career spun off in 1994 with the release of Hips and Makers. The album was widely acclaimed and included “Your Ghost” - a duet with R.E.M.’s Michael Stipe. Since then, Kristin has released a steady stream of solid and distinctly individual solo albums including Strange Angels, Sky Motel, The Grotto and Learn to Sing Like a Star and 2010’s Crooked.

In 2004, Kristin formed the power trio, 50FootWave, releasing a series of frighteningly intense mini-albums, all available for download free of charge. Their latest 'Bath White' EP, however, was released on CD and vinyl in 2016 on HHBTM Records.

Kristin began her book writing career several years ago, including “Paradoxical Undressing” in the UK, (released as the critically acclaimed “Rat Girl” in the USA) and a children’s book “Toby Snax”, and “Don’t Suck, Don’t Die”, a personal account of her long friendship with the late Vic Chesnutt.

In October 2016 Kristin released her latest solo album, a book/double CD combination entitled “Wyatt at the Coyote Palace”, published by Overlook/Omnibus - stories and songs of love and loss combine Kristin’s humor with the pains and travails of a life spent constantly in motion.

Tanya Donelly formed Belly in 1991 after leaving the critically acclaimed Throwing Muses, which she’d founded with her stepsister Kristin Hersh while they were both still in high school. Just prior to leaving the Muses, Tanya co-founded The Breeders as a side project with Kim Deal of The Pixies, but soon realized she needed more space to pursue her own fractured-fairytale alternative-pop-rock song-writing vision.

Tanya went on to pursue a solo career, continuing to perform internationally and, to date, releasing four albums under her own name: Lovesongs for Underdogs (1997), Beautysleep (2002), Whiskey Tango Ghosts (2004) and This Hungry Life (2006).

In recent years, she has self-released a stream of digital EPs known as The Swan Song Series, an expansive collection of collaborations with some of her favorite musicians and authors. The entire series is set to be released on CD and vinyl by American Laundromat Records.

Tanya lives in Boston with her husband, musician Dean Fisher (the Juliana Hatfield Three), and their two daughters, and works as a postpartum doula.