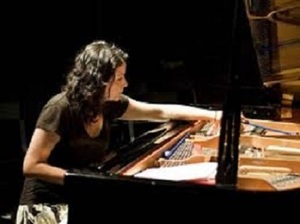 And dubbed one of the music’s top up-and-comers in a 2012 New York Times article titled “New Pilots at the Keyboard”.

(a solo performance): “The music is all improvised, but its rhythmic snap and locked-in precision are unmistakable. Davis emphasizes the percussive side of her playing, mixing shattered-glass runs with hypnotizing riffs—which she bangs out with preparations that land somewhere between Conlon Nancarrow’s player-piano constructions and John Cage’s sonatas, crafting it all on the fly alongside the flinty, heat-producing grooves and angular counterpoint…
Still, as malleable as her playing is, she has a clear identity - Peter Margasak – Chicago Reader
“Words are not necessary, this music will invade you and that is far more satisfying as is a sweet surrendering to its siren call” -- Marlbank

"As she does throughout Aeriol Piano, Davis draws you in so effortlessly that the brilliance of what she’s doing doesn’t hit you until the piece has slipped past you." -- Lloyd Sachs - Jazz Time

Davis was born in Vancouver in 1980 and grew up in Calgary, Alberta.[1] She studied classical piano from the age of six[1] and discovered jazz while a high school student.[2] She transcribed performances by pianists Herbie Hancock and Keith Jarrett.[2] She later reported that, "By the eighth grade I knew I wanted to be a jazz musician."[1] She later majored in jazz piano at the University of Toronto.[1][2]

Davis moved to New York in 2001.[2] Her piano style changed after her first album, Li
Davis works as a collaborator and side person with artists such as John Zorn, Terri Lyne Carrington, Craig Taborn, Tyshawn Sorey, Eric Revis, Michael Formanek, Tony Malaby fespan – "I decided not to play chords anymore, just to play lines".[2] She later obtained a classical composition degree from the City College of New York.[2] To date, Davis has released twelve recordings as leader. Her 2016 release, Duopoly, made The New York Times, Pop Matters, NPR, LA Times, and Jazz Times best albums of 2016.

Davis received a Doris Duke Impact award in 2015 and multiple commissions to compose new works from The Shifting Foundation, The Jazz Gallery/Jerome Foundation and the Canada Council for the Arts.

She is the Associate Program Director of Creative Development for the Institute Jazz and Gender Justice at Berklee College of Music.


The Creative Music Series (CMS) was established in January, 2015, to showcase the work of adventurous jazz musicians from out-of-state, presenting them in intimate venues in the Cambridge/Somerville area. My endeavor was a reaction to the apparent lack of invitations being extended to accomplished, new talent and even unknown musicians to the Boston area. CMS has now begun to zero in on Boston based musicians who are creating their own projects with these out-of-town guests, and taking these musical risks to find an expression and gain a wider appreciation. https://www.facebook.com/CMS.in.Cambridge.MA/.