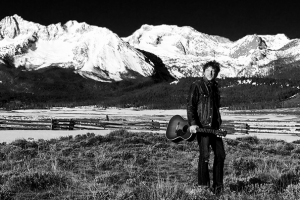 Korby Lenker's 7th studio album wasn't recorded in a studio.
It was created on the edge of the Snake River Canyon, in a cabin north of Sun Valley Idaho, in his father’s mortuary, and in a dozen other places. For music as unique and personal as Korby’s, it only made sense that the actual creation of THOUSAND SPRINGS be part of the story.
Says Lenker: “I grew up in Idaho. My first band, Clockwork Orange, practiced in a basement in Twin Falls. I learned how to play guitar by listening to records and learning the licks, one note at a time. The way I play and think about music now has a lot to do with growing up there, feeling isolated from the outside world. There weren’t a lot of people around me making music. I had to go out and find it.”
Korby's deliberate approach to music is the mainstay of career now tipping into its third decade. Along the way there have been numerous songwriting awards (including first place wins at the 2016 Rocky Mountain Folks Festival Songwriters Showcase) and festival appearances, (Sasquatch, Bumbershoot). Lenker has also shared the stage with such luminaries as Willie Nelson, Ray Lamontagne, Nickel Creek, Chris Isaak, to name a few.
It was in the publication of MEDIUM HERO, Lenker’s first collection of short stories (Turner Publishing December 2015) that he found his true voice, as well as his vision for THOUSAND SPRINGS.
“For me,” says Lenker, "the two most important qualities of good art are originality and meaning. By original, I mean you’ve got to tell your own story and no one else’s…one thing that was good for me when I moved to Nashville was that it forced me to really dig in and figure out what I did that was different than what everyone else was doing. In Nashville, everyone can write a song and everyone can sing. But there is actually very little in the way of true originality. I spent my first three years in town parking cars at a hotel and taking a bunch of chances, creatively speaking. No one really cared about me, which turned out to be very freeing. Those first years were when I wrote most of the stories that became Medium Hero. I started writing songs that tended toward personal meaning over commercial appeal, and along the way I discovered there was an audience for this approach to telling my story. That was the best discovery of all. There are people out there who will let me be myself!"
Deciding that Story is Everything, Korby hatched an ambitious plan for his 7th album. After raising $20K in a crowdfunding campaign, he purchased some recording gear and a high-end battery typically used in climbing expeditions, and drove out to Idaho to see what would happen. He recorded the heart of each song — the guitar and vocal — in different places important to him personally. He recorded during the day and slept in a tent at night. He blogged about it.
After recording the basic tracks, he spent the next several months driving around the country, recording his friends where they lived — in backyards and hotel rooms - in Seattle, Portland, LA, Austin, Madison, Boston and more. Thousand Springs was recorded in 7 states and features almost 30 different artists from the young folk scene, including Nora Jane Struthers, Critter Eldridge, Anthony Da Costa, Amy Speace, Molly Tuttle, Carrie Elkin, Kai Welch, Beck Warren and many more.
Finally, in full-circle flourish, Lenker brought the album back to the present, finishing up the recordings at his home in East Nashville.
Thousand Springs was produced by Korby Lenker, mixed by Paul Mitch, and mastered by Alex McCullough. The official release is slated for May 2017, but copies are currently available exclusively HERE.

Through their rich but rustic sound, Toronto roots-rock outfit The Young Novelists deliver a dose of honesty in audible form.
Made us strangers, their upcoming sophomore effort, showcases a significant sonic progression for the band. Ripe with raw but elegant instrumentation and stacked multi-layered harmonies, their pure take on folk-tinged rock translates equally well from the stereo or stage.
What first began as a stack of songs that frontman Graydon James had amassed behind the drum kit in various bands during his university years eventually became a collection of recordings performed by the six-piece band, Graydon James & The Young Novelists. But over time, as James’ wife Laura Spink became integral to the creative process and the band began performing and touring as a duo, the more succinct banner of The Young Novelists was born.
Since dropping their debut EP, a small town eulogy, in 2011, they’ve made impressive strides up the industry incline. Their catalog also includes a live collection and their 2012 debut LP, in the year you were born, which cemented their status as an act to watch. Now, with made us strangers, The Young Novelists are set to make their most impactful musical statement to date.
“We were looking to inject a bit of excitement and edginess into it this time around,” James says, “but also wanted the recordings to be more organic and true.” For that, The Young Novelists enlisted the aid of producer Carlin Nicholson (Jason Collett, The Golden Dogs), also a member of Toronto rock outfit Zeus. Together, with a minimalist approach to recording – no pitch correction, no click tracks, and some cuts captured entirely live off the floor – they added some grit to The Young Novelists’ sonic grace.
Cuts like “brothers in the garage” showcase the fruit of that union – rooted in folk with the band’s captivating and catchy vocal phrasing but boosted by slightly overdriven guitar and a triumphantly authentic chorus. Similarly, “come back to me” is an upbeat earworm that showcases their breadth of influence. Conversely, more sombre offerings like “always make the mistake” – this one anchored by Spink’s vocals – are delicate but alluring.
“This record hinges on interpersonal relationships,” James explains of made us strangers’ underlying lyrical theme, which includes both traditional and non-traditional ones – from brothers in a band to a torrid love triangle to a new father missing the sound of his son’s voice when they’re apart.
As a published author with one novel – The Mall of Small Frustrations – to his name and two others in the works, James’ words carry a weight and depth that demand repeat listens. The hope, he says, is having a listener connect with the sentiment he explores, if not the specific subjects. “As personal as the songs are,” he offers, “I hope they’re connecting to other people in a way that goes beyond the situations I was writing about.”
That connection is perhaps most intense from the stage. From major festivals like Mariposa and CMW to iconic theatres like the Neptune in Halifax to trendsetting hotbeds like Toronto’s Horseshoe Tavern, The Young Novelists’ show is as engaging as it is endearing and has earned them slots alongside the likes of Cuff the Duke and The Strumbellas.
The band will have many more opportunities to take to the road in the coming months. “It’s going to be a busy year,” James says, but not with the slightest hint of unease; instead, it’s a shred of excitement that belies his modest demeanor.
Honesty and transparency. They’re at the very core of made us strangers, from the lyrics to the music to the way it was recorded, and that’s sure to foster closer connections between The Young Novelists and their current and future followers.