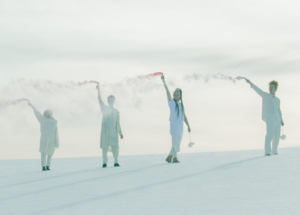 The band grew up with the traditional music scene, deeply embedded in the family. As Kolonien they reinvent their roots with their rich Swedish harmonies, both instrumentally and vocally.

Their journey started in their teens, when they left their countryside home to travel around Sweden as protest singers in the Swedish Green movement. When they got invited to perform at a Zanzibar festival in Tanzania in 2010, things really started taking shape.

It was meant as a one-time gig, but the songs and the conversations of change fell in place unexpectedly well and they decided to start a band and write their own songs.

Kolonien have released two albums. Twice prized and awarded at the Swedish Folk and World Music Awards. Also twice nominated for one of their offspring projects Världens Band for which they’ve gathered thirteen musicians from six countries.