Knives Out at Medfield State Hospital 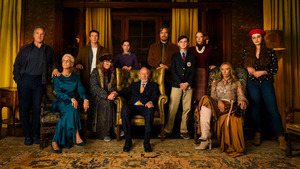 We do encourage you to arrive early if you would like to walk the grounds of Medfield State Hospital before the film begins at sundown, approximately 6pm. These events are rain or shine, and tickets are non-refundable.

We'll be projecting the film onto a 40 foot inflatable screen using state of the art equipment provided by Boston Light and Sound.

Medfield State Hospital is a historic former psychiatric hospital complex at 45 Hospital Road in Medfield, Massachusetts. The asylum was established in 1892 as the state's first facility for the mentally ill. It was formally renamed "Medfield State Hospital" in 1914 and remained in operation until closing its doors for good in 2003. It has also served as the shooting location for the films Shutter Island, New Mutants, The Box, and, of course, Knives Out.