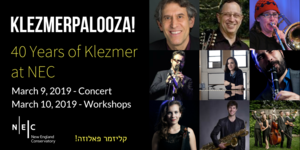 What's better than a free concert, workshops, and a dance party with some of the best klezmer musicians in the country?

The festival consists of three basic parts: an opening concert featuring an all-star group of professional klezmer musicians on Saturday, March 9th, a series of workshops in the morning and afternoon of March 10th, and a dance party featuring the student bands in the evening of March 10th.

All events are free and open to the public at New England Conservatory's Burns Hall, 255 St. Botolph Street, Boston, MA.

Admission is free but registration is requested at https://klezmerpalooza.eventbrite.com.