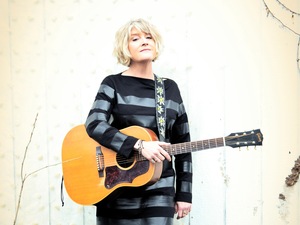 Those artists who find themselves stuck in the deepest of ruts two decades into their careers could learn a thing or two from veteran singer-songwriter Kim Richey. She’s never been afraid to go where the inspiration is.

Two-time Grammy-nominated Kim is a storyteller; a weaver of emotions and a tugger of heartstrings. Tender, poetic and aching with life’s truths, Kim’s songs transport you to her world, where words paint pictures and melodies touch the soul. And then there’s her voice. Pure, arresting and honest, it makes you take notice; Kim has the kind of voice where if emotions were ribbons they’d be streaming in rainbow colors from your iPod.

Early on, the Zanesville, Ohio native thrived on the progressive side of mainstream country, her albums (1995’s Kim Richey, 1997’s Bittersweet and 1999’s Glimmer, all on Mercury) showcasing twang-pop sensibilities, a rich, rounded vocal tone and effortlessly sophisticated songwriting that other discerning performers – Radney Foster, Trisha Yearwood and Pam Tillis to name a few – coveted for their own recordings.

In the years since, Kim has made her subtly psychedelic album Rise (Lost Highway) in Los Angeles with producer Bill Bottrell, flown to London to enlist the help of Giles Martin and emerged with the crisply orchestrated ”Chinese Boxes” (Vanguard) and turned to her East Nashville-based bandleader and frequent co-writer Neilson Hubbard to conjure the earthy indie-pop feel of ”Wreck Your Wheels” (Lojinx/Thirty Tigers) and to complete her latest masterpiece of smart, sensual understatement “Thorn In My Heart” (Lojinx/Yep Roc).

The array of top-tier guests on the album include Jason Isbell, Wilco’s Pat Sansone, My Morning Jacket’s Carl Broemel, Will Kimbrough and Yearwood, who was, for the first time, returning the harmony-singing favor. And the dozen songs themselves show that Richey’s still dreaming up fetching melodies that arc and bend in unexpected ways and still discovering fresh angles from which to articulate matters of the heart.

Over 1000 shows, 10 years, and 200,000 miles have passed since Dean Fields went on the road to pursue a career in music. During that time his address changed from Richmond, VA to Miami to Boston until most recently settling in Nashville, TN. Now, he hits the road again to promote his most recent release “Any Minute Now.”

His recent homecoming has found Fields selling out shows in Richmond, VA, as well as nearby Washington, D.C. “Dean Fields writes lyrics like Leonard Cohen and sings like Jeff Buckley. It’s no surprise that there’s a serious buzz on this Virginia singer-songwriter,” Free Times. While continuing to feed his passion for music, Dean is fueled by a single-minded love to perform, sharing the stage with Willie Nelson, Old Crow Medicine Show, Emmylou Harris, Alison Krauss, KT Tunstall, Blues Traveler, Rosanne Cash, Eric Hutchinson, Colin Hay, Bob Schneider, Auqualung, Hootie and the Blowfish, John Hiatt, Cake, Bruce Hornsby, Rusted Root, Madeleine Peyroux, Carbon Leaf, among others. In addition, Fields’ maturity as a writer and performer is brought to the fore by some of the region’s finest musicians. The band features members of Mandy Moore, Sparklehorse, Agents of Good Roots, KD Lang, Carbonleaf and Modern Groove Syndicate.