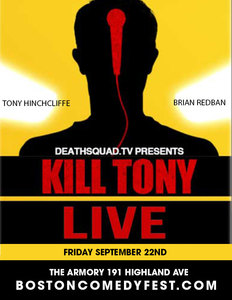 Do you think you are funny enough to be on the #1 Live Weekly Podcast in the World! Tony Hinchcliffe hosts his wildly popular podcast with his co-host Brian Redban. Rising young up and coming comics or failing older comics get their name pulled out of a bucket, do one minute of material each, and then Tony and his two weekly friends/guests give feedback, extra material, and ask questions to the young performers always leading to a hilarious debacle. Pasts guests include Joe Rogan, Sarah Silverman, Doug Benson, Jeff Ross, and Russell Peter. Kill Tony episodes can be found at deathsquad.tv and on iTunes.
If you’re interested in potentially performing on the Kill Tony Podcast, sign ups begin roughly an hour before the show until shortly before show time. You’ll need to write down your name, and if possible a twitter account, and performers will be called up during the show after being randomly drawn from the bucket. Performers will have 60 seconds to perform before being interviewed by Tony, Brian, and the guest judges.