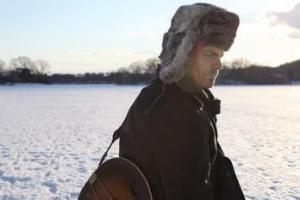 Writing and performing for over twenty years, Kevin Connolly has carved out his own way of writing American songs and earned a reputation as a passionate performer. Connolly has toured extensively in the U.S. and Europe while maintaining a strong presence and tie to his New England roots. Working the college and coffeehouse circuit solo, Kevin has also played major festivals including Newport Folk, SXSW, Kerrville Folk and Bumbershoot. He has opened up for a long list of notable artists including Indigo Girls, Huey Lewis, Todd Rundgren and Joan Osborne. Kevin’s songs have also appeared on network television shows and in major motions pictures as well as independent films.
Raised on Boston’s South Shore, Kevin comes from a musical family with composer/brother Jim Connolly, a fixture of the West Coast “New Music” scene. Early influences like John Prine, Tom Waits and Bob Dylan remain inspirations and guiding forces. Writing descriptive songs that capture something about regular life in America today has been a running theme and preoccupation.

1977. The year that punk was born. With only hours left to spare it also produced a baby boy in the suburbs of Cork, Ireland, born with his ears piqued to the murmurs and clatter around him.
As he grew the soundtrack changed. Nirvana on the Walkman. Leonard Cohen on his sister’s stereo. The surge of bands and songwriters emerging from the 1990’s Cork music scene. Later it became snippets of eavesdropped New York conversation. Tales of woe on the radio. The sights and sounds of tours across Europe.
All of it gets woven into a tapestry of words. Then melody. Harmonies added in the studio. Electricity, sincerity, and humor on the stage. At the core of every Niall Connolly song is the story, one that unfolds a layer with each listen.