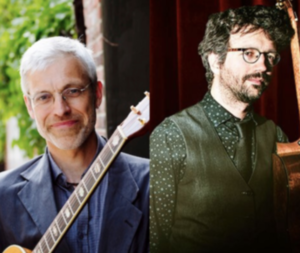 Keith Murphy: A native of Newfoundland, Keith’s traditional song repertoire is based in Eastern Canada and Quebec as well as his current home, Vermont. His direct and intimate style of traditional singing in English and French infuses old ballads and songs with a powerful immediacy while his rhythmic and percussive finger style of guitar playing brings new shape and color to his songs.

Yann Falquet: Yann Falquet is a very active and creative acoustic guitar player on the Québécois music scene. He has explored many styles of music and completed a Bachelors degree in Jazz. Since then, he has developed a personal guitar style for Québec folk music, inspired by the playing of the accompanists of different cultures (Brittany, Scandinavia, Ireland, North America).