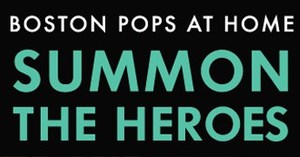 The Boston Pops Orchestra, under the direction of Keith Lockhart, performs a musical video tribute, Summon the Heroes—featuring the work originally composed by John Williams for the 1996 Olympic Games—as a tribute to today’s first responders who are providing critical and needed services during the COVID-19 epidemic. John Williams joins the virtual tribute with a musical and spoken introduction taped from his home studio in Los Angeles.

The Boston Pops musicians themselves conceived of the idea of a “virtual orchestra” rendition of Summon the Heroes as the perfect piece of music to honor COVID-19 front line and essential workers. Nearly 80 musicians recorded their individual parts in their basement, kitchen, living room, or bedroom!

John Williams wrote Summon the Heroes for the 1996 Olympic Games, marking the 100th anniversary of the modern Olympic Games. That same year, a recording of the work by the Boston Pops was released on a CD of the same name.

BSO Recording Engineer Nick Squire and Video Engineer Brandon Cardley, working from their homes, edited the audio and video from 86 individually submitted video files to create the musicians’ gift to all who are giving so much of themselves during this time.