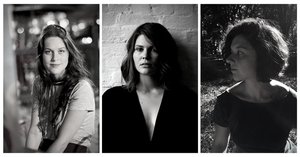 Katie Matzell will return to The Lilypad in Cambridge, MA with good friends Cilla Bonnie + Gretchen Klempa (Gretchen and the Pickpockets).

About Katie Matzell:
Katie Matzell is an up-and-coming singer and songwriter from Portland, Maine, who released her self-titled, debut EP at the start of 2018. In a recent review, The Deli Magazine said “Matzell’s voice, both effortless and simple, floats above a sea of washy keys and pocket grooves, calling comparisons to not only her influences of the past (Bonnie Raitt and Aretha Franklin), but to her contemporaries—Norah Jones and Emily King immediately come to mind.” You can find Katie playing live shows with her band in support of the EP around the Northeast and beyond.

About Cilla Bonnie:
Growing up in a musical household made it easy for Cilla to fall in love with music at a very early age. Beginning piano lessons as a kid quickly turned into classical lessons, which soon became theory/jazz lessons which led to the bass guitar as a teenager.
She studied Music Performance with a Jazz Concentration at the University of Southern Maine. Moving to Boston in 2008 to pursue music made sense. Around this time singing also became a huge passion as well as songwriting. She began backing up songwriters on bass as well as booking her own gigs as a singer/songwriter. Gigging has been a solid way of life since as she's played in most bars/clubs/venues in Boston and many surrounding New England areas.

Some of the main projects she's been a part of have been Samantha Farrell, Qwill, the Dejas, Glenn Yoder & the Western States, Caged Birds, Ross Livermore Band, Billy Wylder and most recently the Ali McGuirk Get Down.

Check out her recently released EP ‘Somehow’ in any streaming service.

About Gretchen Klempa:
Gretchen Klempa is a powerhouse vocalist based in Boston. Klempa's vocals, often described as effortless and commanding, dominate her new solo debut project. Klempa's brand of laid-back and nostalgic indie soul draws inspiration from both the golden age of jazz standards and rock and roll. Gretchen formed the band Gretchen and the Pickpockets in 2012 and began gigging throughout New England. The band went on to garner two Iguana Music Fund grants from Club Passim, Best in State NH 2014 and Best Jazz Act 2018 from New England Music Awards, and are currently nominated for a Boston Music Award. Her solo project gives listeners a glimpse of her own music influences, nuances, and her personality, as her voice as well as the material demonstrate sentimentality, young ambition, and a sense of humor.