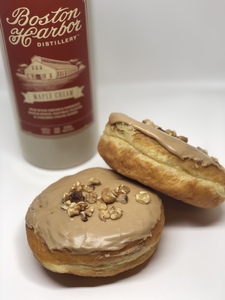 Kane’s Donuts and Boston Harbor Distillery (BHD) have once again come together to host a pop-up at the distillery’s iconic home in Port Norfolk, Dorchester on Sunday, October 4th, 2020. The fall-themed pop-up features all four of Kane’s October specials along with eight tried-and-true flavors.

These donuts are available for purchase via cash only.

In addition to the pop-up, Boston Harbor Distillery will be running their regularly scheduled tours and tastings, along with serving an assortment of delicious cocktails. For more information on tours and tastings please visit www.bostonharbordistillery.com.

The Maple Cream Donut, Mocha Latte Donut, Sam Adams Jack-O Pumpkin Ale Donut and Angry Orchard Hard Apple Cider Donut will be available at all Kane’s Donuts locations through the month of October along with their permanent menu items.