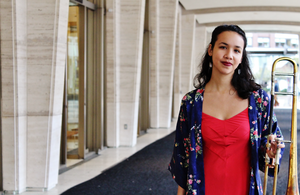 Kalia Vandever is a trombonist, composer, and educator living in Brooklyn, NY. Her debut album, "In Bloom" was released in May 2019 and features all original compositions. We're thrilled to be part of her northeast tour. For this show, her quartet will include guitarist Lee Meadvin, bassist Nick Dunston, and drummer Connor Parks.

This show will be Mandorla Music's first offering in Q Division's Studios' main room, a wonderful space with a great vibe and excellent acoustics for an intimate concert.