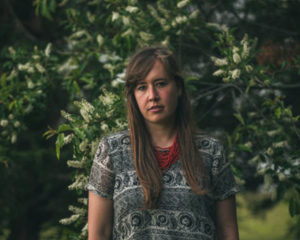 On the inside cover of singer-songwriter Kaiti Jones’ new record, VOWS, it reads:

Vow. a solemn promise or assertion; specifically: one by which a person is bound to an act, service, or condition.

On November 26th, 2017, Jones filled an intimate subterranean music venue with over one hundred people she knows and cares for, the very people who live at the roots of her songs. This was Jones’ first time headlining Club Passim, a legendary folk spot located down the street from her home in Cambridge, Massachusetts. Her first full-length record, VOWS, dropped only a few days earlier and copies of it rested on the table in the front hall.

Jones’ vows are genuine. They live in her music, her deeply personal lyricism, and the commitment she has made to her community. The album itself took on another level of professionalism, showcasing the immense growth Jones has made as a songwriter, composer, producer and musician over the past eight years. For this project she was sought out by Golden Bear Records, an indie label in Des Moines, Iowa. Over two weeks in the studio in June, Jones and the folks at GBR made VOWS come to life. Now, go to the stereo in search of yourselves. In Jones’ words, may you feel “better, richer, fuller than before.”