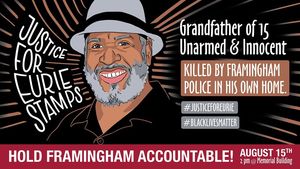 WE ARE TAKING #JUSTICEFOREURIE TO FRAMINGHAM!
SATURDAY AUGUST 15, AT 2 P.M.
MEMORIAL BUILDING IN FRAMINGHAM

Our march in Cambridge was so powerful! We shared Eurie's story and remembered the what he meant to his community. Now let's take it to Framingham to continue demanding #JUSTICEFOREURIE #SAYHISNAMETOO #DONTSTOPNOW

ASL Interpreters will be joining us to provide American Sign Language-English interpreting services for this event.

We are friends of the Stamps family, members of the community, and concerned citizens who have united to honor the legacy of Eurie Stamps, Sr. Together, we seek to shed light on the local and systemic forces that led to his death at the hands of the Framingham Police in 2011.

We will tell his story so that he is remembered, seek justice and a public apology that, to date, has been denied, and help to dismantle the racist institutions and policies that led to the death of an innocent grandfather in his own home, so that this tragedy is not repeated.

WHO WAS EURIE STAMPS, SR.

Eurie “Big Eur” Stamps, Sr, grew up in Cambridge, Massachusetts and was well-known in the community for his kind heart and ever-present willingness to help anyone in need. He raised his children in Cambridge but served as a father-figure and mentor for all of the youth in Cambridge and volunteered countless hours coaching basketball and other sports. He spent his career as a maintenance professional at the MBTA and was looking forward to a peaceful retirement and more time to enjoy his 15 grandchildren, 1 great-grandchildren, and many dear friends and family members. At the time of his death, Mr. Stamps was 68 years old and living in Framingham with his wife and step-son.

THE MURDER OF EURIE STAMPS, SR.
On the night of January 5, 2011, the Framingham Police Department (“FPD”) employed the full force of its SWAT team to serve a routine search warrant directed at Eurie Stamps’ 20 year-old stepson. When the SWAT team and other members of the FPD arrived in the neighborhood, they found and arrested the 20 year-old stepson (suspected of a non-violent drug-related crime) some 300 feet from the Stamps residence. The FPD had no reason to suspect that anyone in the home was armed or violent. The SWAT team knew that Mr. Stamps (age 68) and his wife were not suspects, and posed no threat whatsoever. Mrs. Stamps was on the front steps of the home when the SWAT team approached and immediately complied with orders to lie on the ground, where she was seized and detained.

Thereafter, nearly a dozen members of the FPD SWAT team in full battle gear entered the home with a staggering amount of force and violence, which, by all accounts, was profoundly excessive for the situation. They broke windows to toss flash-bang grenades into the Stamps’ home, and then used battering rams to knock down two doors through which they entered while other officers and fire trucks were standing by outside.

Mr. Stamps was in his bedroom watching the Celtics game in his pajamas. When the SWAT team entered, Mr. Stamps came out of his bedroom and immediately complied with commands to lay face down on the floor with his hands above his head. As other officers searched the home, Officer Paul Duncan stood over Mr. Stamps with his M4 automatic rifle pointed directly at Mr. Stamps’ head. Without provocation, Officer Duncan pulled the trigger and killed Eurie Stamps, Sr., as he lay face down on the floor looking up at Duncan with his hands above his head.

The FPD has maintained that Mr. Stamps’ death was an unfortunate accident. We vehemently disagree. Mr. Stamps’ killing was the direct result of Officer Duncan’s intentional, grossly negligent conduct that violated FPD rules and the training he had received. Duncan disengaged the safety on his weapon, had his finger inside the trigger guard, and aimed his rifle directly at Mr. Stamps face at close range—all in direct violation of FPD regulations and universally accepted protocols. That the FPD employed its now-disbanded SWAT team was inexcusable. Would they have done so for a 20 year- old white suspect in a more upscale neighborhood?

The most egregious aspect of the unlawful shooting of Eurie Stamps is the cover-up that followed. The so-called investigation conducted by the Middlesex District Attorney and the State Police was an unprofessional white-wash. They accepted Duncan’s completely unfounded story that his rifle discharged when he tripped and fell without questioning, under oath, a single member of the SWAT team who was in the room where the shooting occurred or nearby. They conducted no critical analysis of Duncan’s story based on forensic evidence and scientific standards. They completely ignored that Duncan violated FPD training and regulations. That was what the public saw, all part of the cover-up. Meanwhile, the FPD quietly fired Duncan from the SWAT team the day after the shooting. When questioned under oath in the Stamps family’s civil rights lawsuit why Duncan was fired from the SWAT team, Chief Steven Carl responded, “He killed an innocent man.”

While the Framingham Police Department, Town officials, the Middlesex District Attorney and State Police have tried to hide the truth of what happened—we seek to shine a bright light on the senseless, tragic, and entirely preventable killing of this innocent man.

Although several years have passed since Mr. Stamps’ shooting, he remains in our hearts and minds, especially as similar tragedies have to come to light throughout this country. We will fight to honor his life and legacy and to prevent others from suffering the same injustices.