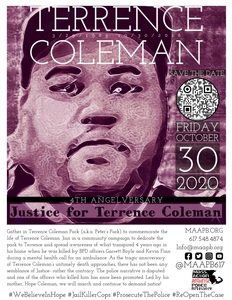 Gather in Terrence Coleman Park (a.k.a. Peter's Park) to commemorate the life of Terrence Coleman. Join in a community campaign to dedicate the park to Terrence and spread awareness of what transpired 4 years ago in his home when he was killed by BPD officers Garrett Boyle and Kevin Finn during a mental health call for an ambulance. As the tragic anniversary of Terrence Coleman's untimely death approaches, there has not been any semblance of Justice- rather the contrary. The police narrative is disputed and one of the officers who killed him has since been promoted. Led by his mother, Hope Coleman, we will march and continue to demand justice!