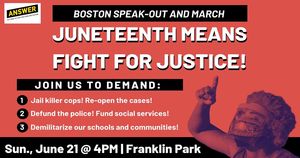 On June 19th, the day the last enslaved Africans were set free in Galveston, Texas in 1866, vile white supremacist Donald Trump is calling a political rally in Tulsa, Oklahoma. Tusla is home to one of the United State’s worst race riots which occurred in 1921 where 300 Black people were killed by mobs of white men, who falsely accused a Black man of attacking a white woman. The entire city was burned to the ground, formerly known as “Black Wall Street” because of the concentration of Black middle class professionals and class mobile Blacks. It was “little Africa” in America to many Black nationalists. That Donald Trump is holding a political rally on this sacred day, in this holy site of Black history, and during such an unprecedented fight in the struggle for Black Liberation and fundamental social justice, is truly disgusting and should turn the stomachs of any progressive minded person. Instead of working to jail the killer cops, he gloats about the need to be firm and crackdown hard, he poses with the Bible while we get shot at, and he refuses to meet any of the demands of the people such as defunding the police while the billionaire class walks away with hundreds of billions of dollars - all during a global pandemic of which the United States is the epicenter of.

All of U.S. society is in rebellion against the racist status quo. Since May 25th, the day George Floyd was lynched on camera by Minneapolis Police, with officer Derek Chauvin kneeling on Floyd’s neck for nearly 9 minutes as he pleaded “I can breathe” and called for his deceased Mother. Following this brutal murder, far too common in the U.S. hundreds of thousands of protestors took to the street all over the U.S. demanding justice for George, but also forr Ahmaud Arbery, Breonna Taylor, Tony McDade, and all victims of racist police state terror.

Protests have spread from Minneapolis to all 50 states, urban and rural areas, encompassing a broad multinational and intergenerational movement, rooted in the Black working class. They have inspired protests in Greece, Paris, Nigeria, France, Korea and more. The whole world is screaming out for justice.

Right here in Boston we have victims of racist police state terror that have yet to receive justice. We have a fight here. We have victims of police brutality and terror such as Terrence Coleman, Dennis Reynoso, Ross Batista, Burrell ‘Bo’ Ramsey-White, and Usaamah Rahim. Families need justice and the killer cops should be held accountable to the fullest extent of the law for their senseless murders. We also have a police budget that dwarfs all of our items on our city budget, which grows every year and now stands at $414 million dollars not including the $60 million for police overtime. Meanwhile public schools face budget cuts, teachers are being laid off, the cost of housing skyrockets, basic social services are always on the chopping block.

On June 12, Mayor Walsh announced a proposal to reallocate 12 million from the proposed BPD overtime budget to community programs. However, this is less than 3% of the full budget of the police department! Social services must be fully funded! It is completely rational why many are in the streets demanding that cities defund the police - they consume too much of our tax dollars for little in return but brutality and lack of accountability. As the final budget vote on June 24 looms, we must stay in the streets to keep the pressure on and to demand:

- Jail the Killer Cops! Re-Open ALL the cases!
- Defund the Police! Fully Fund Social Services!
- Demilitarize Our Communities! Police out of BPS! National Guard out NOW!