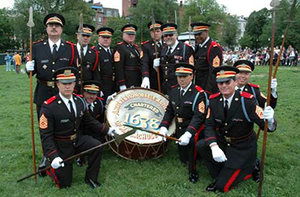 Election of Officers & Sergeants of the Ancient and Honorable Artillery Company
June Day Ancient & Honorable Artillery Company
Bring the family and observe the largest military parade on the East Coast! Over 30 historic military organizations participate in this yearly parade and ceremonial event! (Download Invited Military Organizations) A parade precedes the AHAC Company election. The Company marches from their Headquarters in Faneuil Hall to the Granary Burial Ground on Tremont Street. At the cemetery they lay a wreath at the grave-site of Robert Keayne the First Captain Commanding of the Company.

Drumhead Election Ceremony
The parade then proceeds to The Cathedral Church of St. Paul on Tremont Street for a memorial service for recently deceased members.The parade then reconvenes and proceeds to Boston Common. At the Common the drumhead elections is reenacted for officers and 12 elected Sergeants. The ballots are distributed, collected and placed upon the drumhead, which is located in front of the Company.

MA Governor Issues Commissions
Out-going officers tender their resignations to the Governor of the State of Massachusetts, the Commander-in-Chief, and newly elected Officers receive their commissions. The election is an reenactment of the first election and has continued without interruption since 1638. The parade then reconvenes and proceeds to a local downtown hotel.