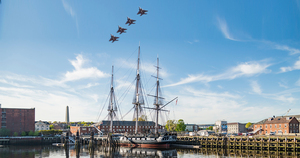 Secretary Esper approved a Department of the Interior request for DOD support to the 2020 Salute to America. 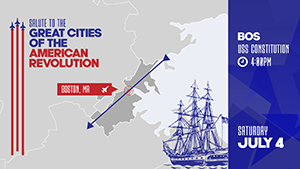 "The highlight of this year’s celebration will be our salute to the Great Cities of the American Revolution. The flyovers will begin in Boston and proceed to New York City, Philadelphia and Baltimore. From there they will join other Department of Defense and heritage aircraft in the Salute to America over our nation’s capital. In all, roughly 1,700 service members will support the celebrations."

BOSTON: The aircraft are scheduled to overfly the center of the city at approximately 4:00 pm approaching from the northeast at 1,000 feet above the ground. Multiple aircraft will overfly the U.S.S. Constitution and then proceed over Fenway Park before departing the city.

NEW YORK: The aircraft are scheduled to fly down the Hudson River at approximately 5:00 pm and pass just east of the Statue of Liberty.

PHILADELPHIA: The aircraft are scheduled to overfly the center of the city at approximately 5:15 pm approaching from the northeast at 1,000 feet above the ground. Multiple aircraft will fly over Independence Hall and the Liberty Bell and then proceed southwest out of the city.

The flyovers provide an opportunity for DOD to demonstrate the capabilities and professionalism of the United States Armed Forces. Flying hours are a sunk cost for the Department of Defense, and these aircraft and crews would be using these hours for proficiency and training at other locations if they were not conducting these flyovers.

DOD is proud to help celebrate the nation’s 244th birthday. We are grateful for our nation’s support as we defend our country, 24 hours a day, 7 days a week, 365 days a year.